By SNCC Legacy Board

We are standing on dangerous ground today. Much that we fought for and won is under great threat. We, veterans of the Student Nonviolent Coordinating Committee (SNCC) and the SNCC Legacy Project (SLP), join with the defenders of justice and equal rights in strongly condemning the recent U.S. Supreme Court decision in the Dobbs v. Jackson Women’s Health Organization.

We were beaten, jailed, terrorized, and some of our comrades were killed for our efforts as activists with the mid-20th century southern civil rights movement to make this country enforce its founding documents and amendments, ensuring all people equal protection under the law.

In Dobbs v. Jackson, the SCOTUS has undermined and eviscerated rights enumerated by the 13th Amendment’s prohibition against involuntary servitude and protection of bodily autonomy, as well as the 14th Amendment’s defense of privacy and freedom.

But this is not all. The Supreme Court has already eroded the historic Voting Rights law, curtailed federal agencies from making significant rulings to mitigate climate change, and has also continued to uphold the availability of weapons of war to our citizenry.

And coming up next fall, the Court may possibly change longstanding affirmative action procedures.

We are at a critical moment.

Dobbs foreshadows the erosion of other well-established constitutional rights, including marriage equality, access to contraception, and the right to engage in private, consensual intimate conduct. Shockingly, this ruling refuses to protect abortion even in cases of rape, incest, or medical emergency. Furthermore and importantly, it does not obligate the government to provide for the material needs of the women and families forced to bear children. It totally disregards the most reported reasons – primarily socioeconomic – that women choose to terminate their pregnancies: interference with work and/or education, and taking care of dependents.

Disproportionately, those who will suffer the most are Black and Brown poor women.

The Dobbs decision raises the question once again of just who has a right to life. Currently, Black women are three times more likely to die during childbirth as white women. This ruling will potentially increase Black maternal deaths by 33%. In Mississippi (the plaintiff in this case) from 2013 to 2016, Black women accounted for “nearly 80% of pregnancy-related cardiac deaths.” In the U.S., all women are 14 times more likely to die by carrying a pregnancy to term as by having an abortion.

As law professor and author Michele Goodwin writes, The Dobbs ruling “reveals the court’s indefensible disregard for the lives of women.” Goodwin also notes, the Supreme Court’s decision in Dobbs “is in league with some of the Supreme Court’s darkest rulings — Plessy v. Ferguson — which opened the floodgates to separate-but-equal laws that ushered in Jim Crow, and Buck v. Bell, which sanctioned states’ eugenics laws permitting forced sterilization of poor women.”

Dobbs is not about “States Rights” or “Protecting Life.” It is about power and control. It continues the highly organized attack by right-wing forces to roll back gains made since the 1950s, 1960s and beyond to ensure equal rights for all. It is an assault on the constitutional guarantee to equal protection under the law and the right to due process.

It is about minority rule and the end of democracy. 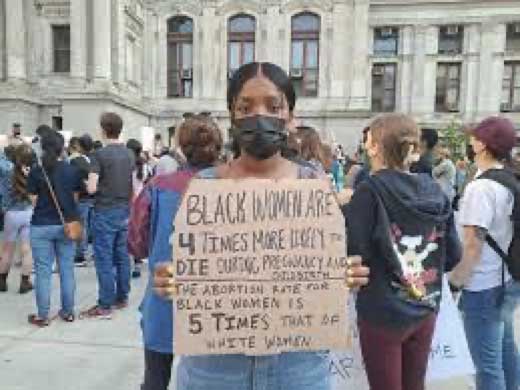 If the real issue were “saving babies,” then all babies would have healthcare, no child would be hungry, all children would be housed and clothed, and none would lack a quality education.

In short, the Dobbs ruling will exacerbate societal inequalities and its harms will fall disproportionately on low-income people. Most dangerously, it continues to legitimize and empower those who have nothing but contempt for democracy.

We SNCC veterans will continue, as we have for 60-plus years, to demand equal justice, including reproductive justice, economic justice, and bodily autonomy for all. We will not stand by as constitutional rights are stripped away, one by one, and our country is returned to the White Supremacist, patriarchal and misogynist society it was before the important gains of the civil rights, women rights, and other movements by marginalized groups. Women’s Rights are Human Rights. These rights strengthen democracy. The SLP will defend and fight for women’s rights to reproductive and economic justice as an integral part of the expansion of democratic rights for all in our country.