“His devotion, eloquence and generosity of spirit has ennobled and adorned the movement in our time. Because of his quiet self-confidence and humility he never sought publicity but thousands, especially poor folk, here and on the Continent have had their lives vastly improved by Ed’s effectiveness and compassion. He is truly one of the great un-sung heroes of our generation. We shall not soon see his like again.”

Eddie Charles Brown, Jr., a great-souled human being committed to fighting the oppression of all people from Mississippi to South Africa, died at his home on November 23, 2011. In political circles, Ed was respected for his enduring commitment to our people. As a consequence of his tireless devotion to, and success in advancing the culture and economic progress of poor black folk, Ed Brown was widely recognized as among the most, incorruptible, responsible, resourceful and effective of the activist leaders of the Movement. As his SNCC colleagues said of him, “More than most, Ed’s life embodies and exemplifies to a remarkable degree, the principle of undying love for our people both here and in the Motherland. ”

Although the consummate organizer and community activist in matters of the aesthetics of black musical culture and the southern oral tradition, Ed had the soul of a poet and the eloquence of a griot. Similarly, his great sensitivity to African cultures is reflected in the quality of the extraordinary collection of traditional African religious art, which he and his wife Valinda have painstakingly gathered over many years.

A year prior to his passing Ed gave his Shahada (acceptance of Islam) to his younger brother the Imam Jamil Al-Amin (formerly known as H. Rap Brown) to whom Ed’s observable devotion, loyalty and commitment was widely seen as an unconditional and admirable example of brotherly love. The janaza (last rites) were held November 24, 2011 at the West End Community Mosque in Atlanta, Georgia.

A native of Louisiana, Ed was born on August 19, 1941, in New Orleans and raised in Baton Rouge to Thelma Warren and Eddie Charles Brown, Sr. Ed’s historical efforts to fight segregation and all forms of oppression as well as to empower Black people started in 1960 as a young student at Louisiana’s Southern University. He and 16 other classmates confronted the University and staged a sit-in protesting the racial segregation prevalent in Louisiana at the time. After he and the others were arrested, expelled and banned from enrolling in any university in Louisiana Ed began the ongoing struggle for justice, which would define his entire life. This expulsion led Ed to Howard University in Washington, D.C. in 1961, where he landed on the front line of the Civil Rights Movement. Ed was an active member of the Nonviolent Action Group, the SNCC affiliate at Howard.

As a leader and field secretary for the Student Nonviolent Coordinating Committee (SNCC) he fought to win constitutional rights for Blacks and all disenfranchised people. Ed always proclaimed that he was “fighting fire with a feather,” but he knew he would prevail because he often said, ironically, he was protected by “asbestos gloves.”

A Life of Service

As will be seen from the details which follow, in a busy and active life, Ed never held a job not directly concerned with human advancement. Highly regarded in white political and philanthropic circles for a selfless incorruptibility, Ed bridged the gap between both communities and was able to direct very significant financial resources into poor black communities. The three abiding concerns of his professional life here and in Africa can be seen to have been: democratic political liberation, economic empowerment and the celebration and enhancement of our cultures. By Ed’s efforts a great many thousands of people have had their lives significantly improved.

Among fellow workers, he is remembered for his uncommon diplomatic skill, personal charm and political tact. Kalamu ya Salaam, who served with him on the New Orleans Jazz and Heritage commission recalls, “What I most remember is that the respect he commanded coupled with a delightful sense of humor enabled him to soothe the most outrageous egos, resolve conflicts and bring apparently irreconcilable warring factions together.”

As a staffer at the Citizen’s Crusade Against Poverty in Washington, D.C., in 1965, Ed developed information networks among community-based organizations to support anti-poverty legislation. In 1967, he organized efforts to improve the political and economic conditions of Blacks in the Mississippi Delta as the Executive Director and founder of the Mississippi Action for Community Education (MACE) and The Delta Foundation in Greenville, Mississippi. At MACE, he developed community-based enterprises, producing Fine Vines blue jeans and establishing catfish farms in the Delta. He was the first executive director of the Mississippi Delta Blues and Heritage Festival. In 1974, Ed raised funds and helped organize the Sixth Pan African Congress held at the University of Tanzania at Dar-es-Salaam’s Nkrumah Hall with delegates representing 52 independent states and/or liberation movements in Africa, the Caribbean and other people of African descent.

As Executive Director of the New Orleans Area Development Project in 1976, Ed organized advocacy groups to work for reform by organizing communities to fight police brutality and creating parent-teacher committees for education reform. Ed went on to serve as President and CEO of the Southern Agriculture Corporation in the 1980s where he worked to organize and gain capital funding for small Black southern farmers. In the 1990s as Executive Director of the Voter Education Project in Atlanta, Ed continued his tireless efforts to register Blacks and poor people to vote and to fight legislation restricting poor and disenfranchised people of all color from voting.

From the 1990s through 2006, Ed took his “asbestos gloves” to nations outside the United States. As a senior consultant to the National Democratic Institute, Ed designed and implemented civic and voter education programs to prepare for national elections in Ethiopia, Namibia, Zambia, Nigeria, and Zimbabwe. He was especially involved in the anti-apartheid movement in South Africa which resulted in the freeing of Nelson Mandela. As an international election observer for The Jimmy Carter Center, Ed worked in Ghana, Zambia and The Dominican Republic. As a human rights activist in corporate board rooms, Ed served on the World Council of Churches and Emergency Fund for Southern Africa raising funds for humanitarian relief; at the Center for National Security Studies monitoring American defense policies and budgets; and with the American Friends Service Committee, U.S. Department of Agriculture Citizens Advisory Committee Equal Opportunity and Atlanta Council for International Cooperation. He also consulted with the Asian Council of Churches and participated in the Consultation of Minority Peoples of Japan in Tokyo.

In addition to his international work during this time, from 1994 until 2003, Ed moved into the arena of municipal and city planning as southeastern marketing director for Sidney B. Bowne Engineering. He served as the strategic planner developing relationships between the company and city and state officials in the company’s negotiation and establishment of Geography Information Systems. He worked on transition teams for the mayors of Macon and Albany, Georgia, in 2003 as a consultant with ABC Management where he evaluated and recommended management of staff for city departments and developed strategic plans for incoming mayoral administrations.

Ed developed an early appreciation and love of art while studying at Howard University under Professor Sterling Brown. He became especially interested in the history of African art and cultures. During his later journeys throughout the continent, he began collecting African sculptures and masks which he and his wife, Valinda, expanded with African and African-American art. Ed became a co-owner of Boston’s Harris/Brown Art Gallery, which exhibited major African-American artists. He is widely known for furthering dialogue regarding the importance of nurturing artists of African-American and African descent. As a board member of the High Museum of Art in Atlanta, he was especially proud of being instrumental in helping to establish the annual David Driskell Young Artist Award. He also served on the board of the Atlanta Photography Group where he chaired the Youth Education Program and as chairman of the Funding Committee of the Academy Theater. Ed’s many years of advocating the ascension of African-American artists has resulted in their inclusion in successful exhibitions at various art venues.

Ed’s love and dedication to Black culture embraced music of all kind. He established and promoted the Mississippi Delta Blues Festival while at MACE. He especially enjoyed jazz and gospel and he and his wife made annual pilgrimages to New Orleans for the New Orleans Jazz and Heritage Festival. But Ed’s most enjoyable times at his home with Valinda were preparing deliciously wonderful New Orleans cuisines and sharing those absolutely satisfying meals with friends and family who prized the opportunity to get a cup of Ed’s Gumbo. Ed was a master New Orleans chef who was admired deliciously for his seafood, duck, or pheasant gumbos, and quail in rich brown sauce, and turtle soup with sherry and crawfish bisque and fried catfish and spinach shrimp dressing and sweet potato pone. His demonstrations of affection for food and sharing led to his wife’s publication of a loving cookbook. Ed was an elaborate storyteller, so with each meal came colorful adventures with Ed Brown. Ed was a passionate historian of African culture and he accumulated a large library of African history. He spent many rewarding years studying Yoruba culture. During the 1970s with an extended stay in Nigeria, following an elaborate ritual that included him running alongside camels with a net over his head, Ed was initiated into the ruling Ogboni Society of Yoruba manhood. 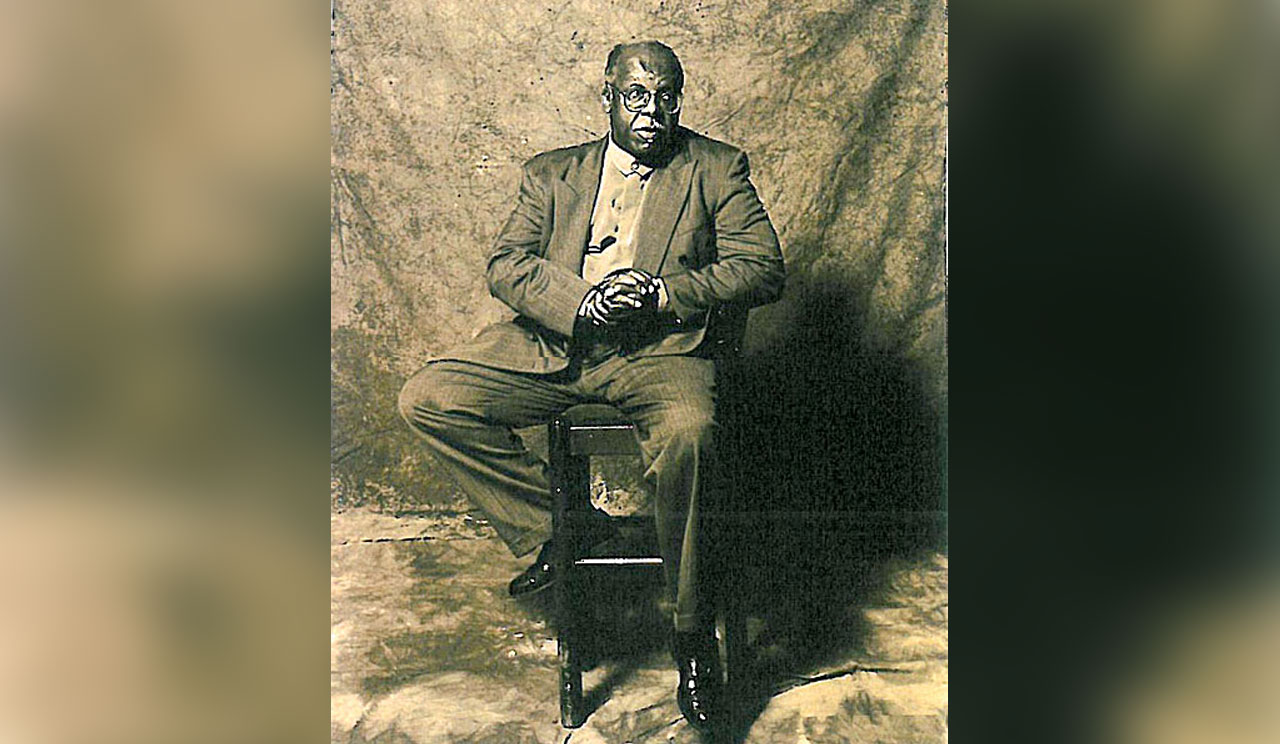