Collaboration with Duke University – 2013 to Present

The SNCC Legacy Project is collaborating with the John Hope Franklin Research Center for African American History & Culture various projects. These projects include:

This website was the first joint project between the SNCC Legacy Project and the John Hope Franklin Center for African American History & Culture at Duke University. The website was a precursor of the SNCC Digital Gateway.

The Voting Rights Conference brought SNCC veterans and members of organizations such as the Movement 4 Black Lives, Dream Defenders, Black Youth Project 100 (BYP100), Showing Up For Racial Justice (SURJ), United We Dream, NAACP and the Young People’s Project (YPP) together to discuss ways of expanding democracy for marginalized communities. 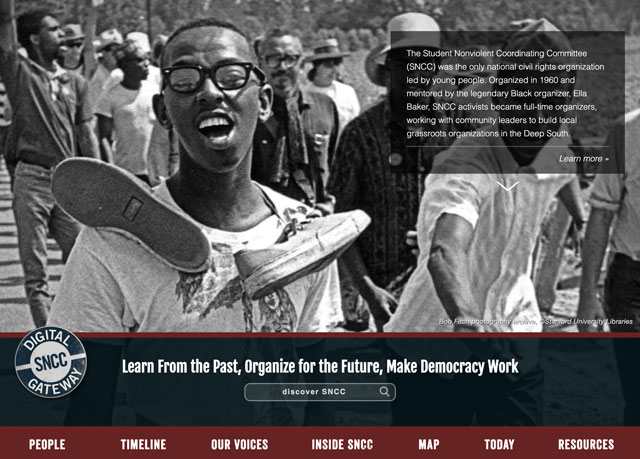 The SNCC Digital Gateway tells the history of SNCC from the perspective of SNCC veterans. The purpose of the SDG is also to pass on informational wealth gathered during the 1960’s Movement to subsequent generations.

Movement veterans who were part of the organizing in Mississippi and the creation of the Mississippi Freedom Democratic Party (MFDP) discuss the difficult decisions and their consequences during the 1964 Freedom Summer Project.

SNCC veterans discuss the emergence and call for Black Power as a natural progression from their work in Lowndes County, Alabama.

A Grassroots Leadership and Arts for Social Change Primer

Article on critical oral history published in A Grassroots Leadership and Arts for Social Change Primer.