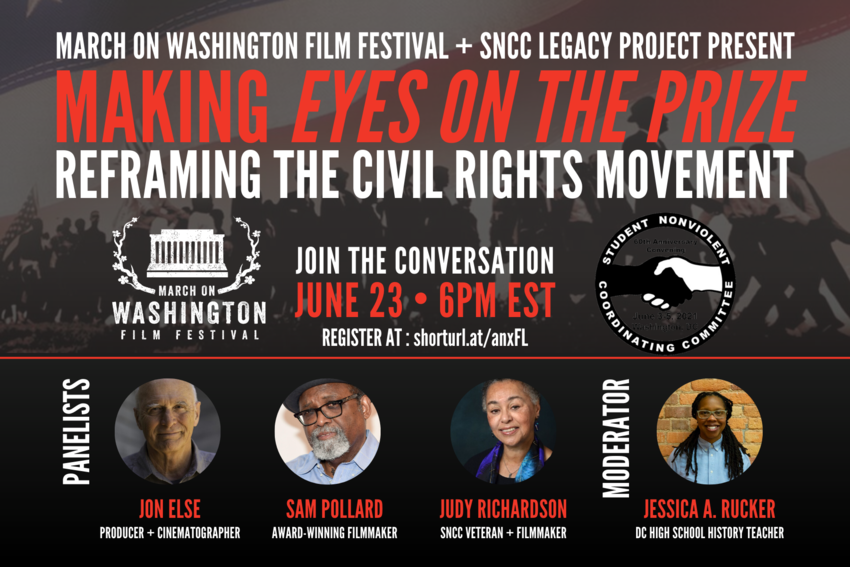 About US is an initiative by The Washington Post to explore issues of identity in the United States. Sign up for the newsletter.

The killing of George Floyd took me back to my Mississippi childhood, where black men were lynched by vigilantes or murdered by the police with impunity. Minneapolis police officer Derek Chauvin’s knee on George Floyd’s neck was reminiscent of how the local sheriff and his deputies patrolled our all-black community — as though they had their knees on our necks.

Sixty years ago, I participated in the civil rights movement to bring about the same kind of changes being sought by Black Lives Matter activists today.

I am angry, because it seems like little has changed.

I was baptized in the Old South’s rigid system of racial segregation, where the do’s and don’ts of racial separation were enforced with heavy doses of violence.

Each time I hear on the news that a black boy or man has been killed by law enforcement officers or armed white men who take it upon themselves to police their communities, like the ones who killed Ahmaud Arbery in Brunswick, Ga., I remember, with pain and anxiety, the racial murders of my youth.

I was almost 12 years old when 14-year-old Emmett Till was murdered by two white men in Money, a small town in the Mississippi Delta, and his body thrown in the nearby Tallahatchie River. Emmett’s crime was allegedly making a pass at the wife of one of the men at a local grocery store. His killing brought absolute terror to my young life because I felt that any of us kids could be lynched. My youth and optimism caused me to believe that his murderers would be punished. It was a painful letdown when the jury deliberated for an hour and found them not guilty.

Three years ago, Carolyn Bryant, the woman whose accusation led to Emmett’s murder, admitted she lied. I was outraged because she waited 53 years before acknowledging that she caused a boy to endure the most violent murder I had ever heard of. Yet she continued to live her life without accountability, like so many other Southern white women who made similar accusations that led to the deaths of falsely accused black men.

I was reminded of Carolyn Bryant when Amy Cooper recently called the police in New York’s Central Park and said a black man who was birdwatching was threatening her after she argued with him when he asked her to put her dog on a leash as required by law.

I have a visceral reaction each time a white person calls the police on a black man, woman or child whom they accuse of threatening them by their mere presence. It angers me that black people must go through life making white people feel comfortable, when it is we who have been terrorized by institutional racism for centuries. Yet our fears are ignored or given short shrift.

George Floyd died after officers didn’t step in. These police say they did — and paid a price.

Like other Southern black college students of my generation, I joined the Student Nonviolent Coordinating Committee (SNCC) along with my sister Dorie Ladner. The organization had been founded in 1960 by John Lewis, now a U.S. congressman representing Georgia, and James Clyburn, now the House Majority Whip, from South Carolina. Other founders included activists Diane Nash and Ruby Doris Smith-Robinson, Julian Bond, who would later become head of the NAACP, and countless others whose sacrifices are legendary.

In 1961, when I was a student at Jackson State College, we boycotted classes and peacefully marched to the courthouse in Jackson, Miss., to support a group of students from Tougaloo College who had been arrested for holding a sit-in at a white public library. We were met with a roadblock, where police attacked us with tear gas and chased us with a dog. I was reminded of that experience recently when federal police used tear gas to disperse peaceful protesters in Lafayette Square in front of the White House.

More than 55 years later, public schools remain largely segregated and black workers earn 73 to 74 cents on the dollar, 62 to 64 cents for black women, compared to what white workers make, and the financial gap between black and white people is as wide today as it was in 1968. The coronavirus pandemic has hit black workers, who are overrepresented in low-wage service jobs, harder than white workers. And it has had an even more frightening impact on African Americans: Although black people comprise 12.5 percent of the population, they account for 22.4 percent of covid-19 deaths.

How U.S. cities lost precious time to protect black residents from the coronavirus

And as a result of the 2013 Supreme Court ruling, black people are again fighting for the right to vote against new restrictive laws imposed by Republican officials around the country.

I am angry when I hear members of an armed militia at the Michigan State Capitol invoke the name of Rosa Parks as a justification for their protests against the statewide stay-at-home order to slow the spread of the coronavirus. And I am angry when I read the blowback on Twitter against Martin Luther King III, who quoted his father as saying that “a riot is the language of the unheard.” They told him that he did not understand the meaning of his own father’s words because in their view, Martin Luther King Jr. was nonviolent and always turned the other cheek. They conveniently ignored the fact that Dr. King spoke out often about the right to protest and to go to jail for what he called just causes. As King’s daughter Bernice King wrote on Twitter, “Don’t act like everyone loved my father. He was assassinated. Many who quote him now and evoke him to deter justice today would likely hate, and may already hate, the authentic King.”

The appropriation of the civil rights movement’s symbols and its leaders’ words is upsetting because those who oppose the protests against injustice want to redefine what we meant then and what we mean now about the pain and suffering of generations of African Americans.

When I see the young people protesting the killing of George Floyd across the country, I am angry that the racial terror we fought against 60 years ago is with us still. I am reminded of the murders of my civil rights mentors, Medgar Evers and Vernon Dahmer, and of the three civil rights workers — Andrew Goodman, James Chaney and Michael Schwerner. I knew James and Michael from the Mississippi civil rights movement. Chaney was a black Mississippian and Schwerner and Goodman were from New York and were Jewish.

I applaud the diversity of the protesters against George Floyd’s killing, because for too long the burden of racism has been foisted on the shoulders of black people, with little responsibility assumed by whites. White people need to accept responsibility personally and collectively, and although their support is appreciated, they must redouble their efforts to enact laws and institutional changes.

My anger is earned and justified. A certain amount of righteous anger and indignation has been and continues to be the engine behind black protests and progress.

The SNCC Legacy Project is partnering with The Highlander Center to host a virtual panel discussion entitled, “The Freedom Struggle Then and Now.” As you know, the COVID-19 (coronavirus) has necessitated the postponement of the SNCC 60th Anniversary Convening. We are working to reschedule the Convening for June 2021. As part of the organizing for the rescheduled SNCC 60th Anniversary Convening, the SNCC Legacy Project will be partnering with organizations representing today’s activists to host a series of virtual meetings that will provide information about the ongoing struggle. 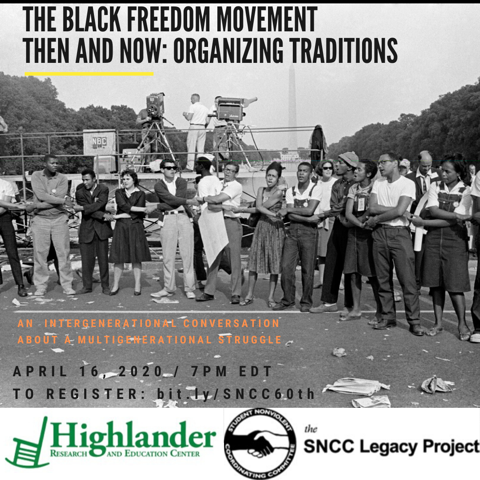 Photo credit: Danny Lyon
January 24, 2020
Statement of Courtland Cox at the funeral of Eric Jones, Washington, DC
TO JOSEPHINE, ERIC’S BELOVED WIFE, HIS SONS PAUL AND ERIC, JR., AND DAUGHTER, LISA AND HIS GRANDCHILDREN.
ERIC’S SNCC FAMILY OFFERS ITS DEEPEST SYMPATHY.  ERIC’S DEDICATION TO BOTH HIS FAMILIES AND TO HIS COMMUNITY IS SHARPLY ETCHED IN OUR THOUGHTS.  TO SAY HE WILL BE GREATLY MISSED IS TO STATE THE OBVIOUS.
ERIC PAUL JONES WAS BORN ON OCTOBER 3, 1943 INTO AN AMERICA, TO QUOTE A RULING OF THE U.S. SUPREME COURT, WHERE “A BLACK MAN OR WOMAN HAD NO RIGHTS THAT A WHITE MAN NEED RESPECT.”  AS WE SIT HERE TODAY, BECAUSE OF ERIC’S COURAGE, THE DETERMINATION OF THE 1960S MOVEMENT VETERANS AND THE SUPPORT OF THE BLACK COMMUNITY, ERIC’S CHILDREN, AS WELL AS, ALL CHILDREN IN THE BLACK COMMUNITY WILL NOT BE ARRESTED FOR USING THE WRONG BATHROOM; SITTING DOWN FOR A MEAL IN A RESTAURANT; SITTING IN THE FRONT SECTION OF A BUS; TRYING TO ATTEND AN ALL-WHITE COLLEGE OR UNIVERSITY; OR TRYING TO REGISTER TO VOTE.
THE SACRIFICES THAT ERIC AND HIS BAND OF BROTHERS AND SISTERS MADE, ALLOWS ALL OF OUR CHILDREN AND GRAND-CHILDREN TO DREAM BEYOND THE NARROW CONFINES OF WHAT WAS PRESCRIBED FOR HIM AT HIS BIRTH IN 1943.
ERIC WAS A MEMBER OF THE NON-VIOLENT ACTION GROUP, AFFECTIONATELY CALLED NAG.  NAG WAS A COLLEGE CAMPUS CHAPTER OF THE STUDENT NON-VIOLENT COORDINATING COMMITTEE (SNCC) THAT WAS COMPOSED OF HOWARD UNIVERSITY, AMERICAN UNIVERSITY, AND A FEW HIGH SCHOOL STUDENTS.
IN THE 1960’S, HE CHALLENGED THE SYSTEM OF SEGREGATION AND DISCRIMINATION IN THE DISTRICT OF COLUMBIA THAT DID NOT ALLOW BLACK PEOPLE TO WORK AS BUS DRIVERS, DID NOT ALLOW BLACK POLICEMEN TO RIDE IN POLICE CARS, AND DID NOT ALLOW BLACK PEOPLE TO TRY ON CLOTHES IN THE DOWNTOWN DEPARTMENT STORES.  BLACK MEN AND WOMEN FACED SEGREGATION IN HOUSING AND LIVED IN A CITY WHERE THE SOUTHERN SEGREGATIONIST CONGRESSMEN HELD POLITICAL POWER.
ERIC WAS BOTH A FIERCE WARRIOR AND A GOOD FRIEND.  HE HAD A 3RD FLOOR WALK-UP APARTMENT ON FLORIDA AVE, BETWEEN 18TH AND 19TH STREETS NW, AND ERIC ALWAYS WELCOMED ME TO STAY THERE ON MY TRIPS IN AND OUT OF WASHINGTON.  ONCE WHILE CRASHING AT HIS APARTMENT, I WAS READING A NOVEL WHERE THE HERO OF THE STORY WAS NAMED ERIC “HEAVEN SENT” JONES.  FROM THEN ON, I STARTED REFERRING TO ERIC AS “HEAVEN SENT” AND HE TOOK THE NICKNAME IN GOOD STRIDE.  I WAS ALWAYS GRATEFUL FOR HAVING A PLACE TO STAY, AND ERIC’S GENEROSITY WAS TRULY HEAVEN SENT.
IN MY MIND’S EYE, I ALWAYS SAW ERIC AND JOSEPHINE TOGETHER.  ERIC LOVED AND COULD TELL A GOOD STORY AND ALWAYS APPRECIATED A GOOD JOKE.  HIS RESPONSE WAS ALWAYS HEARTY LAUGHTER WHILE JOSEPHINE WOULD HAVE A GENTLE AND WARM SMILE.  I GUESS THE REASON I ALWAYS THOUGHT OF THEM TOGETHER IS THAT THEY’VE BEEN MARRIED FOR 51 YEARS.
IN THE LATE 1970S AND EARLY 1980S, SNCC VETERANS BECAME THE POLITICAL LEADERSHIP OF WASHINGTON.  ERIC WAS ON THE STAFF OF JOHN WILSON, THE CHAIRMAN OF THE CITY COUNCIL.   MARION BARRY BECAME MAYOR.  SEVERAL SNCC VETERANS, INCLUDING MYSELF, BECAME PART OF THE EXECUTIVE BRANCH OF THE DISTRICT GOVERNMENT.
WITH SNCC VETERANS IN THE LEADERSHIP OF BOTH THE LEGISLATIVE AND EXECUTIVE BRANCHES OF GOVERNMENT, MANY THINGS WERE ACCOMPLISHED TO HELP THE CITIZENS OF THE DISTRICT OF COLUMBIA.  THE SUMMER YOUTH PROGRAM WAS FOUNDED, MINORITY BUSINESS PROGRAM WAS ESTABLISHED, OPPORTUNITIES WERE OPENED FOR YOUNG PROFESSIONALS IN THE MAJOR WHITE LAW AND ACCOUNTING FIRMS IN WASHINGTON, DC, SENIOR CITIZENS PROGRAMS WERE GREATLY ENHANCED, AND THE DISTRICT GOVERNMENT BECAME A MUCH MORE PROFESSIONAL OPERATION.
WHEN ASKED ABOUT HIS HIGHEST ACHIEVEMENT IN LIFE, MARTIN LUTHER KING, JR. SAID, “TELL THEM I TRIED TO HELP SOMEBODY ALONG THE WAY,”.  AS I THINK ABOUT ERIC, WHAT COMES TO MIND IS THAT, LIKE MARTIN LUTHER KING, JR., ERIC DID TRY TO HELP MANY ALONG THE WAY, AND WE’RE ALL GRATEFUL FOR THE CONTRIBUTIONS HE MADE TO IMPROVE THE LIVES OF EACH OF US.
ERIC, MY BROTHER, WE WILL MISS YOU! 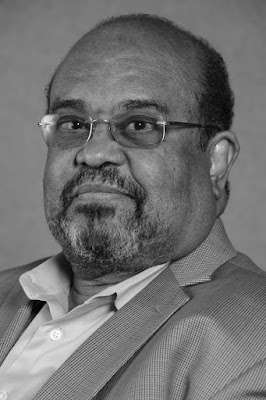